The SLS International Club was founded by students in 2007.  The club exists to study, in a semi-informal way, different nations of the world in order to cultivate an awareness and appreciation for the wide variety of peoples and cultures in the world.  Students plan and present information (historical, political, economic, religious, cultural and geographic) about a nation generally using electronic and digital means.  Presentations are engaging and feature many photos and videos.  Students then decide which country to study at the next meeting.  The International Club also participates in the annual Cultural Heritage Celebration by making food from one of the countries members have studied.  The International Club meets every other week and is moderated by Mr. Jeffrey Krieg. The local chapter of St. Lawrence’s Honor Society is affiliated with the National Honor Society of Secondary Schools. The Rector annually appoints a Chapter Advisor, who may serve consecutive terms. The Rector has the right to approve all activities and decisions of the chapter, which extends to the selection and dismissal of members.

The Rector also appoints five voting faculty members who, along with the non-voting sixth member, the Chapter Advisor, comprise the faculty council. The faculty council meets to consider selection and non-selection, dismissal and other actions.

Membership is an honor bestowed upon a student. No student has a right to be selected for membership. Selection for membership is based on outstanding scholarship, character, leadership, and service. The selection of each member to the chapter is by a majority vote of the faculty council. Candidates must have been in attendance at St. Lawrence for one semester.

While the academic criterion is important and is considered first, membership is not extended on the basis of grades alone. Three other criteria are used: leadership, service, and character.

The English Department at St. Lawrence Seminary High School works together to offer students the opportunity to read and discuss books beyond those that they read for class, an idea that was student generated.

Some students read a few chapters a week which are discussed at the weekly meeting, while others read faster and, after discussing the first book, take another one from the books that are offered. Each grade has its own club with age-appropriate books.

The selections cover a variety of books. Some are classics, like The Grapes of Wrath (U.S.), The Lord of the Flies (England), Crime and Punishment (Russia), The Stranger (Algeria/France), or The Count of Monte Cristo (France). Others are more recent classics, like Pedro Páramo (Mexico), Siddhartha (Germany/India), One Hundred Years of Solitude (Colombia), The Name of the Rose (Italy), or Midnight’s Children (India).

We try to add a new book each year. Some recent additions have been The Kite Runner (Afghanistan) and The Rule of Four (U.S.).

Some reading club meetings feature as many as thirty students exchanging views, while other meetings may be just one student discussing a book with the reading club advisor.

There are times when the majority of the students in a class are all reading the same book at the same time, so that they can talk about the book together all week, not just at the reading club meetings. They also encourage each other in their reading.

The reading clubs are an opportunity for reading improvement for the students, as well as a chance for them to widen their knowledge of the literary world. 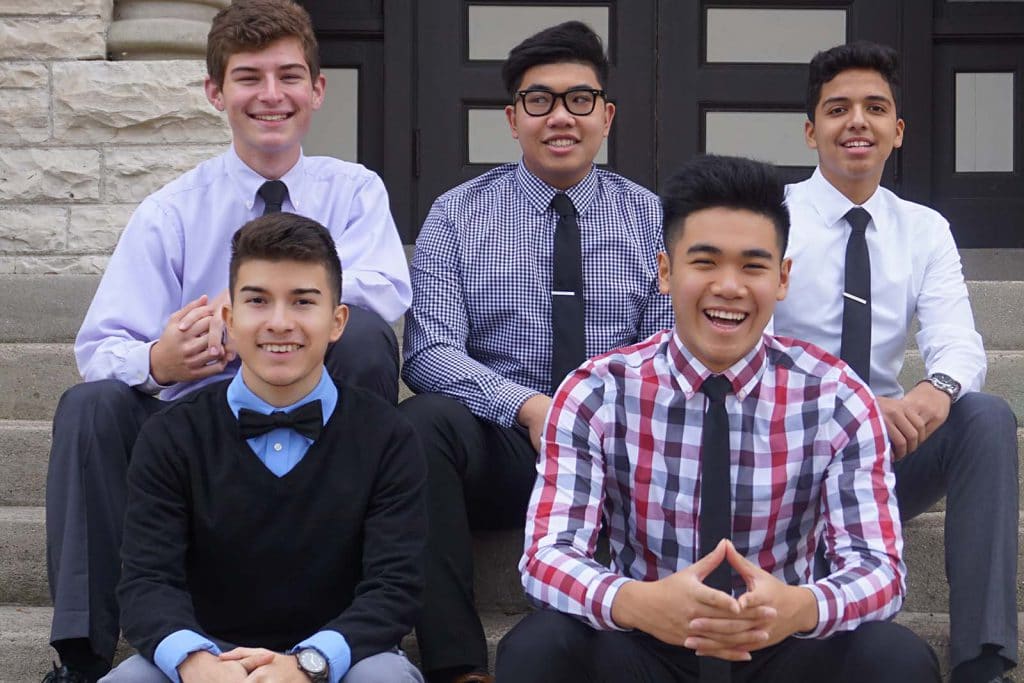 At the beginning of each year, each class, except the freshman class, conducts elections for a Class President, Vice-President, Student Spiritual Life Representative and three Student Council Representatives.

Freshmen have elections during the second quarter, after they have had a chance to get to know their classmates. The student council functions as a forum for the student body to demonstrate and practice student leadership.

In September, St. Lawrence Seminary High School students elected to leadership positions are commissioned during a prayer service. During the service, the Rector asks the newly elected leaders to respond to three questions:

The newly elected leaders are presented with a Tau Cross made by Br. John Willger and his students in woodshop. The Tau was a favored symbol of St. Francis, and signifies for the community a desire to be servant-leaders like St. Francis.

In late November, after the freshman class elects its leaders, the Student Council President presides at an evening prayer in which the freshmen leaders are commissioned. Again, these student leaders are asked to commit themselves to serve the community and are presented with Tau Crosses. 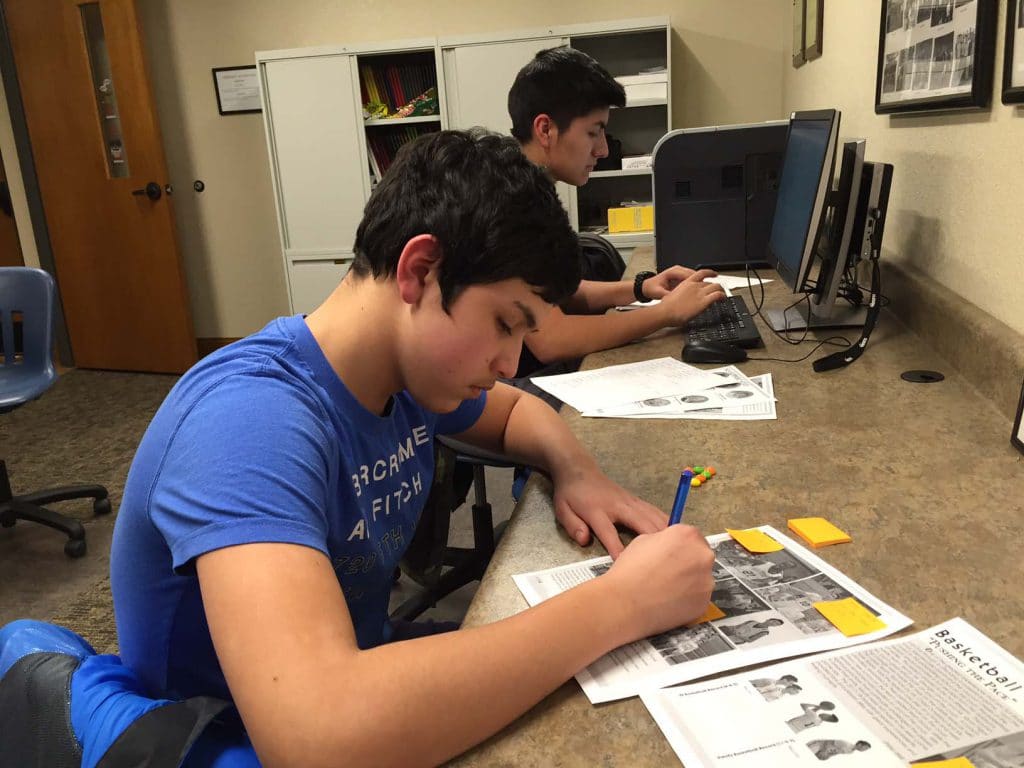 Hilltopics (School Newspaper)
As part of the student publications program, students may join the staff of the school magazine Hilltopics. Hilltopics has been published as the school’s magazine since 1965.

Currently published six times a year, each issue of Hilltopics is loaded with updates about happenings on campus. There is a wide variety of news, spiritual, sports, and entertainment topics covered in every issue.

A student staff, led by a senior editor-in-chief, organizes each aspect of the publication. With guidance from faculty supervisors, students choose article topics, assign and write articles, take photographs, lay out each issue electronically, and distribute the paper.

The student magazine is available by subscription for parents and families of current students, as well as benefactors, alumni, and others interested in the school. Many parents have commented that it is an excellent source for keeping up with what is happening on the Hill. Admissions recruiters also find the publication helpful in showing prospective families what the student body is like and the types of activities that often occur on campus. Anyone interested in subscribing to Hilltopics may contact Mrs. Deann Sippel.

Inklings (Literary Arts Magazine)
Launched in 2015, Inklings is a reminagining of bygone publications that once existed on the Hill. It is a student-run publication that offers the opportunity for students to share their creative talent. The magazine staff consists of students from all grades who are led by a managing editor, who is a senior, and a staff advisor. After collecting submissions throughout the year, the magazine staff works to create an artfully designed publication. Students may submit artwork of any medium (including sculpture, drawing, painting, and photography) and writing across any genre (including essays, poetry, and short fiction) for consideration. The staff then selects pieces, designs layouts, and publishes the issue in the spring. Inklings gives all students on the Hill an opportunity to display their creative talent which may have fewer formal outlets in their lives.

St. Lawrence Seminary’s yearbook, the Laurentian, has been published since 1963.  The yearbook is a record, in pictures and text, of a particular academic year.  A large student staff, advised by Mr. Jeffrey Krieg, creates page layouts, takes photographs, writes articles and captions, and engages in a variety of behind-the-scenes jobs to produce the yearbook, which highlights a particular theme each year.  Staff members learn how to use current technology, digital photography and publishing software, as well as learn how to work together to meet deadlines, plan ahead and be creative.

“Yearbook is an exciting group activity. You have to depend many times on other people to complete the job. I am grateful for the dedication of many staff members who make it possible to finish the book. Together, we have a lot of fun making the book and then enjoying the finished product for years afterward.” Vincent Dang (’08). 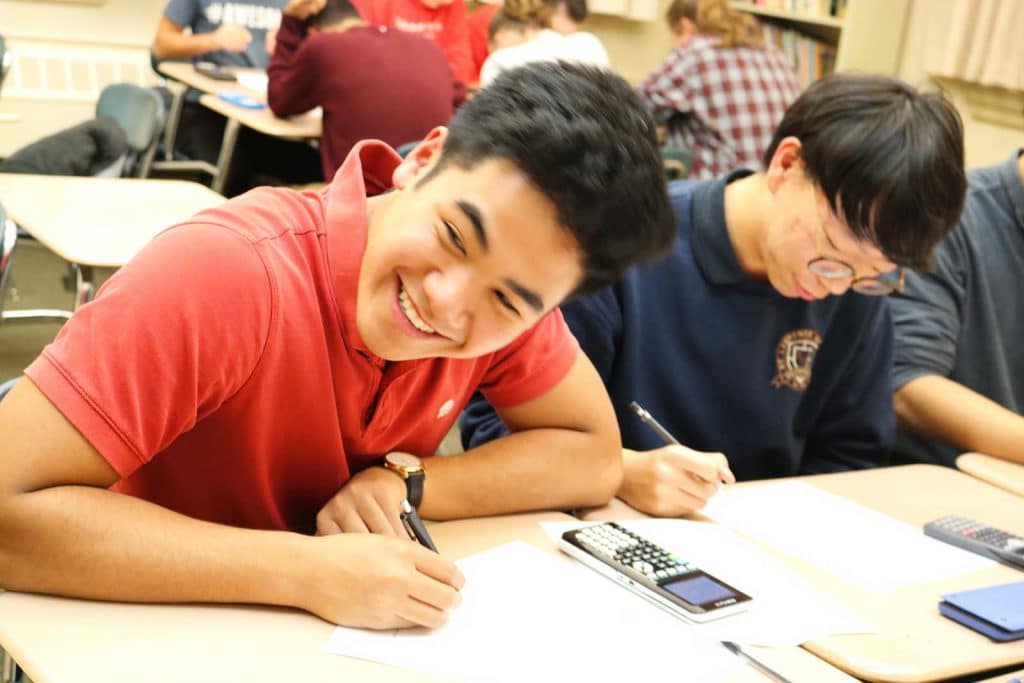 The Math Team offers an opportunity for students from all classes to test their mathematical aptitude against students from other schools in the area. The only requirement for participation is an interest in mathematical problem solving.

Meets take place monthly, with the hosting school writing the test. Students from each school form eight-man teams, with no more than four seniors per team. The teams take four individual fifteen-minute tests and one twenty-minute team test. Students are judged on an individual level, and the three students with the most points from each grade receive medals for their achievements. Team scores are then added, and plaques are presented to the three teams with the most points.

A spring conference math meet among schools in the Wisconsin Flyway Conference caps off the season. Writing the tests and hosting the meets rotates among the schools. Each meet prepares the students for the conference challenge and the chance to Bring Home the Gold!

It is fun to meet students from others schools and to compete against the best in the area.

Math meets make you think out of the box and quicken your ability to solve problems.

A nice reward for all the hard work in math class.